The Origin Of Hashtags And Why Everyone’s Using it 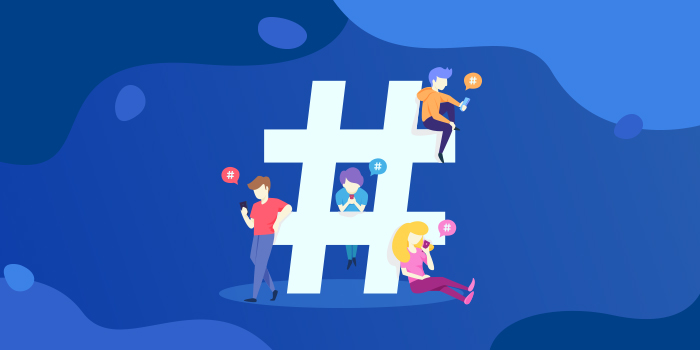 There was a time before hashtags were on social media. Users were more isolated and disconnected from each other beyond their friend lists. There was access to posts from unknown sources, but it was unorganized. There was no key, or index, one could add to a post that would connect it to other people posts of similar topics. Unlike now.

But hashtags existed much before the advent of social media. In 1988, the first hash symbol was used on Internet Relay Chat (IRC) to label groups and topics that were available across the entire network. They were used for grouping similar messages and content to make it easy for users to find the information they were looking for.

Twitter was the first social media platform to adopt the hashtags feature. In its early days, users complained that it was a bit of a free for all and that they were seeing irrelevant content. Looking for a solution to this problem, in 2007, Chris Messina, a social technology expert, took inspiration from IRC, and came up with the idea to use hashtags on twitter.

He first posted the hashtag “#barcamp” in August 2007. The whole tweet appeared like this: “how do you feel about using # (pound) for groups. As in #barcamp [msg]??”. While Twitter did not support the idea of the hashtag in 2007, Chris Messina saw an opportunity to get this hashtag idea noticed. There was an incident when California resident Nate Ritter happened to be tweeting about a wildfire situation. At the same time, Chris Messina noticed that “SanDiegoFire” was being used as a tag on Flickr. This inspired Messina to reach out to Nate Ritter and suggest the use of “#SanDiegoFire” on all relevant tweets.

This caught on, pretty much like the wildfire itself. Ritter’s tweets became so well known that Twitter users started using hashtags to group relevant content together. In 2009, Twitter finally embraced hashtags and introduced a search tool, so that users could see who else was using a particular hashtag. The following year Twitter introduced “Trending Topics,” which displays the most popular hashtags at a given time.

From that point on, hashtags were adopted by other social media platforms and became common enough for people to be using them ordinarily. Instagram, which was launched in 2010, has used them from day one. Facebook added them in 2013. Google+, Tumblr, and Pinterest also let users group content by simply using the # symbol.

Today, over 125 million hashtags are shared globally every day on Twitter alone. Hashtags are created by several social media experts, educators, institutions and major companies from all around the world to bring in more followers and increase brand recognition. You can check how well a hashtag is doing by exposing it to analytics tools that will tell you how many tweets are being made with it, how many impressions it is making online, who are talking about it, what other hashtags are being used and what people are saying exactly.

Hashtags have also become so useful that they spearhead movements. For example, the simple hashtag #MeToo evolved into a mindblowing global movement against sexual harassment which saw people from all walks of life speak out about their experiences with sexual abuse and harassment. The movement spread when Hollywood actress Alyssa Milano encouraged use of the hashtag “#MeToo”  among fellow victims to speak out in a show of solidarity.

There are numerous uses of hashtags. One useful type is when customers can complain about a company, often to complain about the customer service experience with large companies. The term “bashtag” has been created to describe situations in which a user refers to a corporate social media hashtag to criticize the company or to tell others about poor customer service. For example, in January 2012, McDonald’s created the #McDStories hashtag so that customers could share positive experiences about the restaurant chain. But, the marketing effort was canceled after two hours when McDonald’s received numerous complaint tweets rather than the positive stories they were anticipating.

Although the hashtag started out most popularly on Twitter as the main social media platform for this use, the use has extended to other social media sites. Instagram allows you to follow hashtags, so that images and videos with a particular hashtag in their captions will appear directly onto your newsfeed, making it easy to find relevant content automatically instead of searching for them.

Although all major social networking platforms use it, we must give credit to Twitter for starting this out. Hashtags have become so useful that a lot of businesses depends on its usage. It’s about using the right word, at the right time, with the right tweet, and money can shift pockets as a result of this (directly or indirectly). Was this Messina’s vision? Did he also predict the overuse and misuse of hashtags that is rampant today? One cannot say, but what can be deduced is that this feature is here to stay. It’s way too useful and relevant. It’s one of social media’s core features and for a long time will remain to be.